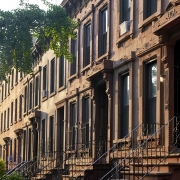 This week’s Digs Watch takes us back to Brooklyn for a look at the bananas townhouse market. Just how bananas is it, do you ask? Well, according to a new report from Brooklyn-based brokerage Ideal Properties Group, townhouse sales in Brownstone Brooklyn* reaching the majestic stratosphere of $3MM and above have increased 579% since the days of famine immediately following Lehman Brothers’ bankruptcy, with the most significant increase coming between 2013-2014 when the number of such sales nearly doubled. Even Gowanus, the lovable superfund site nestled between Park Slope and Carroll Gardens, saw its first $3MM+ townhouse sale last year. This data highlights the reality of the situation on the ground in these neighborhoods, which can be boiled down into two words that everybody looking for an apartment has heard by now: low inventory. While the beautiful Brooklyn brownstone is not exactly a rare commodity, as row upon row of gorgeous homes line the tree-lined blocks of these fantastic neighborhoods, the proliferation of the “I have means, and I choose Brooklyn over Manhattan” mentality, combined with the growing livability of the once gritty borough and desire to raise families over a few thousand vertically-contiguous and period-detailed square feet with a bbq-friendly backyard, have created an insatiable appetite for townhouses. This trend has boosted townhouse sales at all price ranges, which, not surprisingly, has pushed many townhouses in the prime neighborhoods into the $3MM-and-above category, caused developers to join the party by building new townhouses (for example, here and here), and driven many affluent buyers into areas outside of traditional Brownstone Brooklyn (like Bed Stuy and Crown Heights). I don’t see the back-to-Brooklyn brownstone movement abating in any meaningful way, even if there is a major market correction. The Brooklyn sales market is simply absurd right now and any down tick will likely bring the market down a few notches closer to reality and be seized upon by opportunistic investors and fortuitous market timers, just like in 2009. It will barely skip a beat.

The report can be found here:

If You Build it, They Will Come…But How Will They Get To Red Hook?
Scroll to top