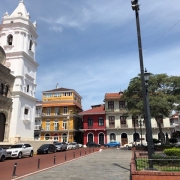 While Digs operates solely in New York, we have many friends and clients outside New York who are very good to us who we try to see periodically (so they don’t forget about us).

As we have written about before, every year on Thanksgiving, we host a charity auction. All our guests bring things they no longer want or need that they think someone else at our Thanksgiving will want. They auction off their services, like soccer coaching and babysitting. They auction off their vacation homes. We raised the most money yet at our Thanksgiving 2018. We were raising money for HIAS. HIAS protects refugees who have been forced to flee their homelands because of who they are, including ethnic, religious, and sexual minorities.

What does this have to do with Panama?

We had 30 guests at our 2018 Thanksgiving, including our friends Yosi and Vivi, and their beautiful daughter Raquel, who are from Panama City and were living in NYC at the time. Yosi was kind enough to auction off his mother’s amazing beach house in Santa Clara, which we all bid up, and Dan’s mom (also a Digs client) won! She was kind enough to invite the family to join her on an adventure in Panama.

It was quite a house… And quite an adventure… We spend the winter holidays in Panama this year with the whole Gotlieb clan: Dan’s parents, his aunt and uncle, and his sister and her family. Our goals on our trip: see our friends, explore Panama City and its architecture and real estate, eat good food, rest and get some much needed sun.

In the end, our first extended family vacation was a success, and our trouble maker even behaved himself! Some of the highlights: The Panama City skyline is remarkable and far beyond what we expected. 16 of the 25 tallest buildings in Latin America are in Panama City. In the early 2000s, the city experienced a construction boom, with many new buildings being built. We learned that real estate values in Panama City have increased a lot in recent years, but that salaries have not kept up, and it is hard for most people to afford to buy a home. According to our friends, the best way to make money in Panama is by owning your own business since salaries are quite low.