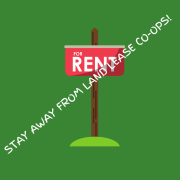 What is a Land-Lease Co-op?

In November 2014, Digs wrote a blog post about the perils of land-lease co-ops. In a ground lease, the owner of land leases it to a developer with the intent that the developer will build something valuable on it. The term of a ground lease is typically very long (for example, 99 years). The developer pays the ground lessor a fixed rental payment (like any other lease). This payment resets at various points during the lease term, typically according to the market value of the land. At the end of the lease term, the ground lessor can take the land back with all improvements, but very often the leases are renewed.

Except in Battery Park City, ground leases are not typically found in residential buildings (there are less than 100 in New York City). Among other things, they add a layer of costs on top of each unit owner’s maintenance/common charge payments, which can become considerable with each rent reset. This makes the apartments less marketable. In turn, they generally sell at a significant discount to comparable units in buildings unencumbered by ground leases.

Sometimes, the co-op buys the land at an exorbitant price (at a tremendous expense to its shareholders). If they cannot muster the funds, they agree to painful one-sided terms favorable to the ground lessor. This separation of interests also creates the very scary prospect of a ground lessor selling the land to opportunistic investors looking to capitalize on the rent resets that will occur during periods of rising land values.

According to the Real Deal, in January 2018, when the assessment for the land under 101 West 23rd Street increased, the rent reset tripled the homeowners’ costs.

Many of the apartment owners previously sold their units to the management company at steep discounts. A 2015 lawsuit by some homeowners against the firm that owns the land and now controls 85 percent of the co-op, alleged E&M Management threatened a 2018 rent reset. They alleged E&M wanted to buy the homeowners units at a discount, so E&M could gain control of the building and make everyone leave. If everyone moved out, E&M could enhance the value of the site by developing it.

Homeowners of land leased co-ops have few remedies. This is why we always tell our clients to stay away from land lease co-ops (except in Battery Park City where the land under all the buildings is owned by the Battery Park City Authority, rather than a private developer, and is less likely to be unreasonably reset).