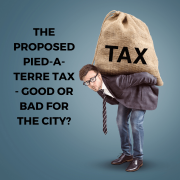 The Proposed “Pied-a-Terre” Tax in NYC

It is no secret that New York City real estate has become an attractive vehicle for high net worth non-residents to invest their capital.  It is widely perceived as one of the safest and most stable investments available in the increasingly unstable global markets.  In fact, many new condo developments have been built and marketed primarily for foreign (and/or non-local) investment.  Essentially, they are being marketed as a safety deposit box of sorts where the depositor can entertain friends and rest his or her head after grabbing a world-class dinner and catching The Book of Mormon.

But what does NYC get out of it?  Apparently, according to some City and State lawmakers, not enough.  City Councilman Corey Johnson plans to introduce a resolution that supports a new tax on non-residents who own NYC real estate, AKA a Pied-A-Terre, valued in excess of $5 million. Similar legislation has also been announced in Albany.  The tax, if approved, can raise up to $665 million annually for the City, according to the Fiscal Policy Institute.

This new Pied-A-Terre tax begs a number of questions.  Most importantly:  (i) are these non-residents paying enough to the City and State, in the form of direct taxes and indirect economic benefits, to offset their costs, and (ii) will this tax chill the development and purchase of real estate (a major driver of New York’s economy)?

Let’s take a step back and try to understand and oversimplify the existing economic impact of these pied-a-terre owners.  Supposedly, non-resident real estate purchasers are good for New York City.  Just ask Mike Bloomberg, who famously wished that all billionaires would move to New York, saying that it “would be a godsend.”  At first glance, without the additional tax, Mike seems to be right, so why mess with a good thing?  While most pied-a-terre owners are not billionaires, they do provide considerable economic benefits.  For example, they increase demand for condos in towers built with local labor.  They also lead to increased State and City transfer tax, capital gains tax and property tax revenue, and increased support of local businesses.  On the flip side, these non-residents do not pay City or State income taxes.  However, they are beneficiaries of all of the City’s public services (which are subsidized by resident taxpayers) like the police, fire, transit, sanitation and parks departments.

There are valid arguments to both sides of this issue, which undoubtedly go much deeper than described here.  Lawmakers will no doubt hear plenty from each side (with the real estate industry in vehement opposition) as this bill is debated.

On the issue of whether a pied-a-terre tax will negatively affect real estate, my guess is that it probably will not.  New York is a gateway city and one of the top destinations in the world (as well as perennial contender for “Best Place Ever”).  People from all over the world park their money in its real estate because it has historically appreciated and is considered very safe relative to other markets. If a small tax is added to the non-resident owner’s bill, those attributes will not change.  It will not shake the markets into sustained volatility nor will it considerably increase the cost of owning New York real estate, which is not typically a primary concern for non-resident owners anyway.  Rather, its likely effect will simply be a small reduction in the ROI realized by these purchasers and will not reduce the demand or desirability of these units.  Thus, developers will likely continue to develop and purchasers will likely continue to purchase.

If you are interested in discussing further, please reach out to me.